We are proud to announce that Panucci Custom Guitars is reaching for new frontiers. Last year in 2019, at the Mannheim guitar summit, many visitors told me that my guitars were some of the best at the show, but they didn’t know the brand name. This made me realize that we can no longer be “the best kept secret”. More guitar players need to be able to play my guitars and run into them at their favorite boutique guitar store. This sounds obvious. And in fact, I had been approached by store owners many times asking if they can sell my guitars. But I always had my reservations, because in a way, the whole experience of having me build your guitar is part of the process. Having dealers would cut out this personal contact with me as a guitar builder. However, there comes a point that it is time to get to a new phase. Yes, people can still order a guitar with me, come to the shop, talk about all their wishes. And in addition, now we are also available at some selected boutique guitar stores in Germany, starting with Lead Guitars owned by Ralf Schalck. Also Gregor Hilden has sold Panucci guitars over the years, whenever he could get his hands on one. For us, the contact with store owner is very important. We needed to have a good personal and professional click with them. All of them are people with the same enthusiasme and passion for guitars. They know the all details of my guitars and can talk about everything you need to know. One more thing, having dealers does not mean that I can build more guitars. It’s still a one man shop. I take every detail serious, and in particular the aging needs to take its time. My production will be roughly 30 guitars a year.

It’s been a good start indeed. The German magazine Grand Guitars has decided to feature a review of the ’59-C-056, (which was on sale at Lead Guitars, but sold in a couple of days). A very beautiful review by Leonardt Breuken. His opening words for the article:
“And again the day brings a light for us! Why does the song by Udo Jürgens comes to my mind when I am supposed to test a 59-style guitar? Did Udo Jürgens play a Les Paul? Is he known for fat, heavy, exhilarating guitar sound? Has he been posthumously crowned as guitar hero? No? Then there must be a different reason.” A few more quotes: “What peels out of the case immediately shoots up the blood pressure and expectation, because that „thing“ emits right of the box the vibes of a “Paula” who aged gracefully. She looks worn, but loved and not aged as an end in itself, has a soft, warm colour of amber, a fine grained, not over-the-top flamed and sensationally shaped one-piece maple top, which the belly and recurve has been crafted with an elegant drive I know from the old Paulas. ” And: “The neck dimension is within a moderate ’59 range and feels like walking in perfectly worn-in shoes. The aging and fretwork is sensational.” … “Together with his hand-wound pickups, which tend towards vintage under wound pickups, he is looking to reproduce their open, clear tone.” … At the end of the day it matters to him how it sounds – and that is something I am especially looking forward to.” … “My personal highlight is the neck pickup with moderate gain, here shows the Panucci how beautiful she can sing. And there is that impact but with an inherent sensitivity that just makes happy. „When a dream, any dream doesn’t come true“ sings Udo Jürgens, the Panucci makes every dream come true!” .. “The Panucci ’59 Inspired is not a simple clone of the grand dame but sheds independence and character, she is not just a copy but a further development which brings joy to every Les-Paul-Aficionado.” The story was so heart warming that we decided to make a thank you video featuring a ’59 Inspired and the Udo Jürgens song, played by our friend Sietze Bouma. Yes with that ’59 sound! 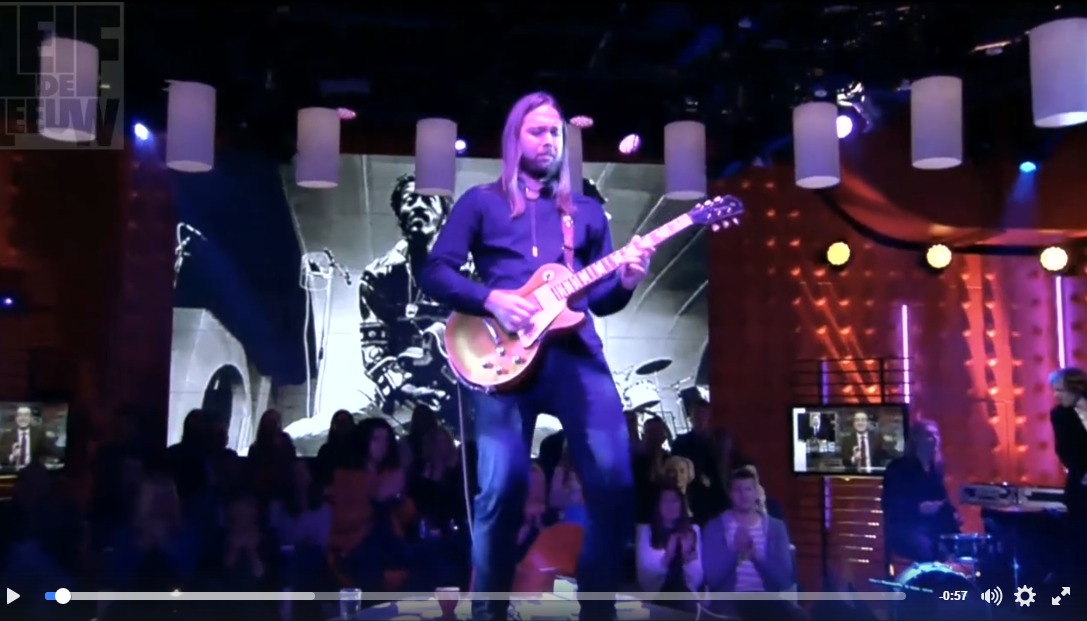 END_OF_DOCUMENT_TOKEN_TO_BE_REPLACED

All the year I had been so busy with all kinds of orders, but finally I managed to take some time for starting my own models. Actually, these are re-issues, or re-inspired recreations of the models that I made since the late ’90. I have always been very reluctant to build the traditional models. Six years ago I started these for fun, when I was following advanced training for building acoustic and archtop guitars. As these picked up very well, I got more and more fun in building my ’59s and the original model was always slumbering in the back of my head.
END_OF_DOCUMENT_TOKEN_TO_BE_REPLACED 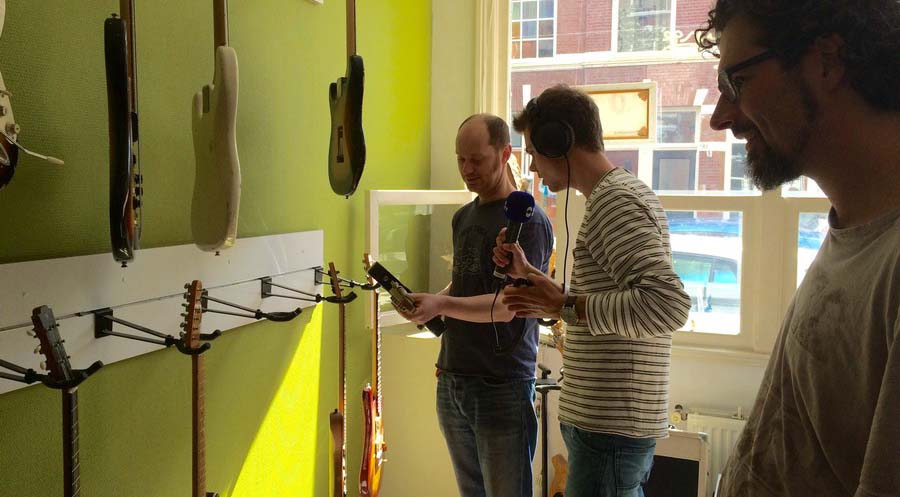 Freija was the main guest for night show Nachtkijkers (night vision goggles) for Radio 1. The whole show from 2AM till 6AM! Her main topic is exploring the future and her work as chair of the Dutch Future Society. Reporter Ruben Kooren paid a visit to The Guitar Lounge and made a report on my work and Panucci Custom Guitars. I invited my friend and neighbour Roman Baatenburg de Jong to make some guitar noise for the radio.

END_OF_DOCUMENT_TOKEN_TO_BE_REPLACED

I am never fond of raising prices. Didn’t do so when sales taxes went up in the Netherlands. Didn’t do it when the Euro went down on the Dollar.
END_OF_DOCUMENT_TOKEN_TO_BE_REPLACED 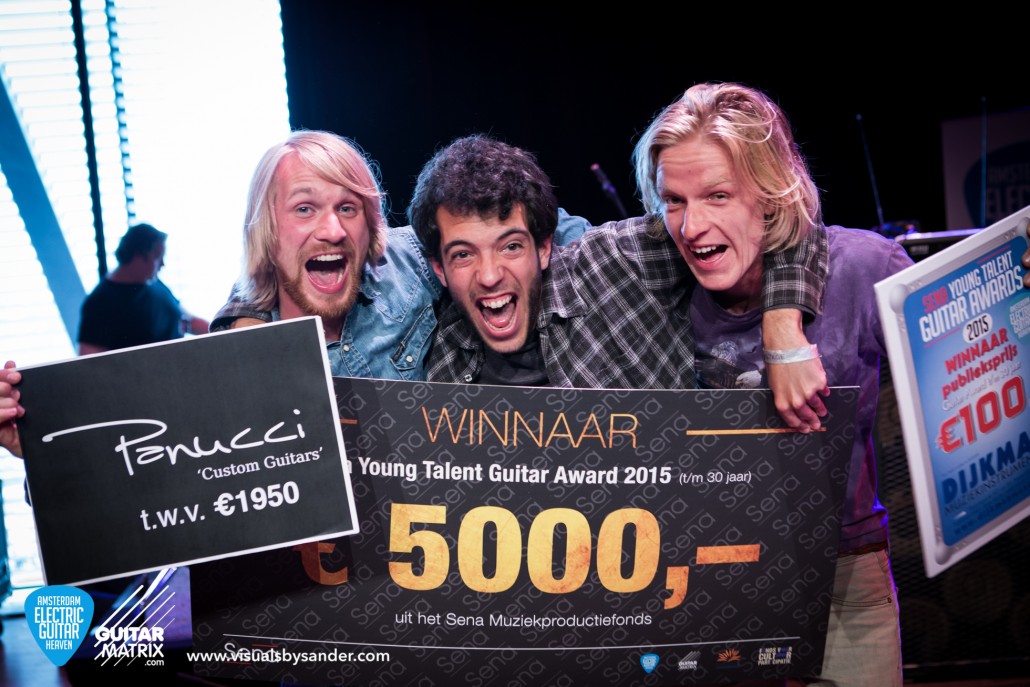 We congratulate the winners of this year’s SYTGA, Antonio Molina Moya and Tom Renet with their first price of a custom Panucci guitar. We are looking forward to discuss their wishes, favorite specs to find what they were looking for, just as we did last year for Leif de Leeuw and Ryan Vroon. Having seen all the other contestants, we know the competition was tough. Therefore, also congratulations to all the other great guitar players. Just join the competition next time, and who knows!
END_OF_DOCUMENT_TOKEN_TO_BE_REPLACED

Sheer coincidentally, there are several Panucci players in the Cologne region. And even more so interested in Panucci. Then one Cologne guitar player came to my shop and invited me to his practice basement in Cologne. And so a group of eight guitar players were there and the space full of Panuccis. Some brought their own Panuccis, so there were more ’59s than ever in my store! For two guitar players, it was a special moment, as we delivered their custom order. The first sounds of them playing it, were magic.
END_OF_DOCUMENT_TOKEN_TO_BE_REPLACED

In this early stage of the ’59 series, I need some thorough testing to get a good understanding of the sound and how they are appreciated. Especially because vintage guitars and the real ’59s (build between ’58 and ’60) sound a bit differently than the ones that are build today. My quest is to design a open sounding vintage voiced ’59, what some people call a “tele on steroid”. No muddy neck pickup, but open, bright and with articulation, great dynamics and string separation. What I call, thinner but broader. To find out if people recognized this in my ’59s, I organized a double blind test with eight very different players (from jazz to metal to vintage rock) who tested, scored and judged the guitars, purely on their ears and playability. Here a short impression of the results.
END_OF_DOCUMENT_TOKEN_TO_BE_REPLACED 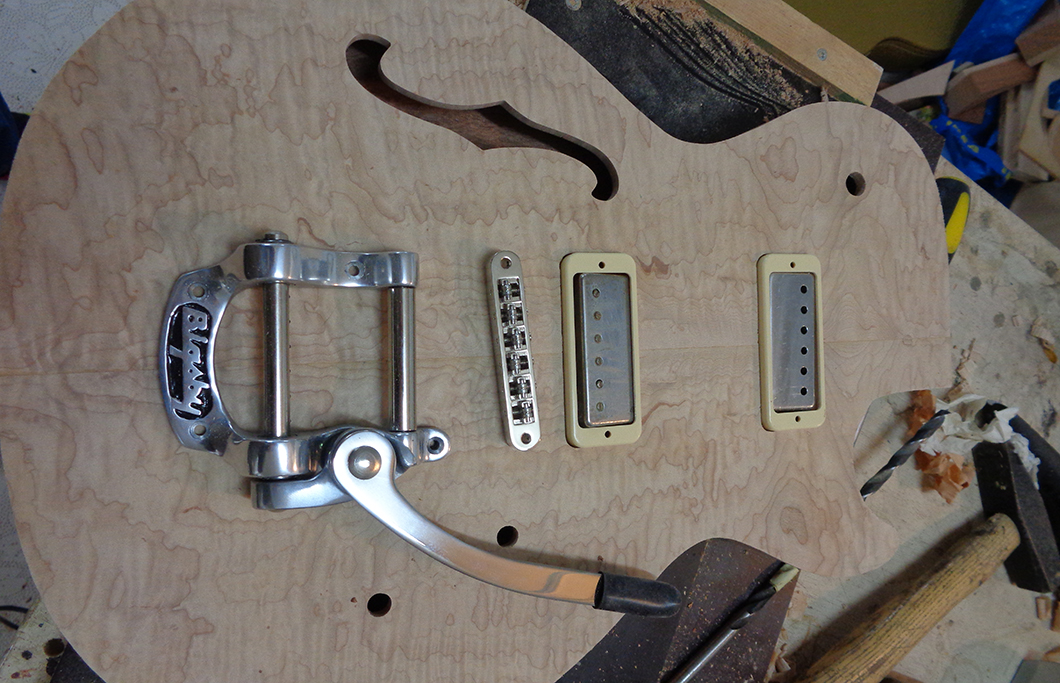 My idea for the ’59 Inspired series is to design a  whole range of vintage inspired guitars. So I started with this thinline flat-top guitar. The top has a nice flame. Decided to make just one soundhole, with the same shape as I did earlier for an archtop guitar. No soundhole on the other side to make place for the control knobs and the Bigbsy. Watch the progression on Facebook.

END_OF_DOCUMENT_TOKEN_TO_BE_REPLACED 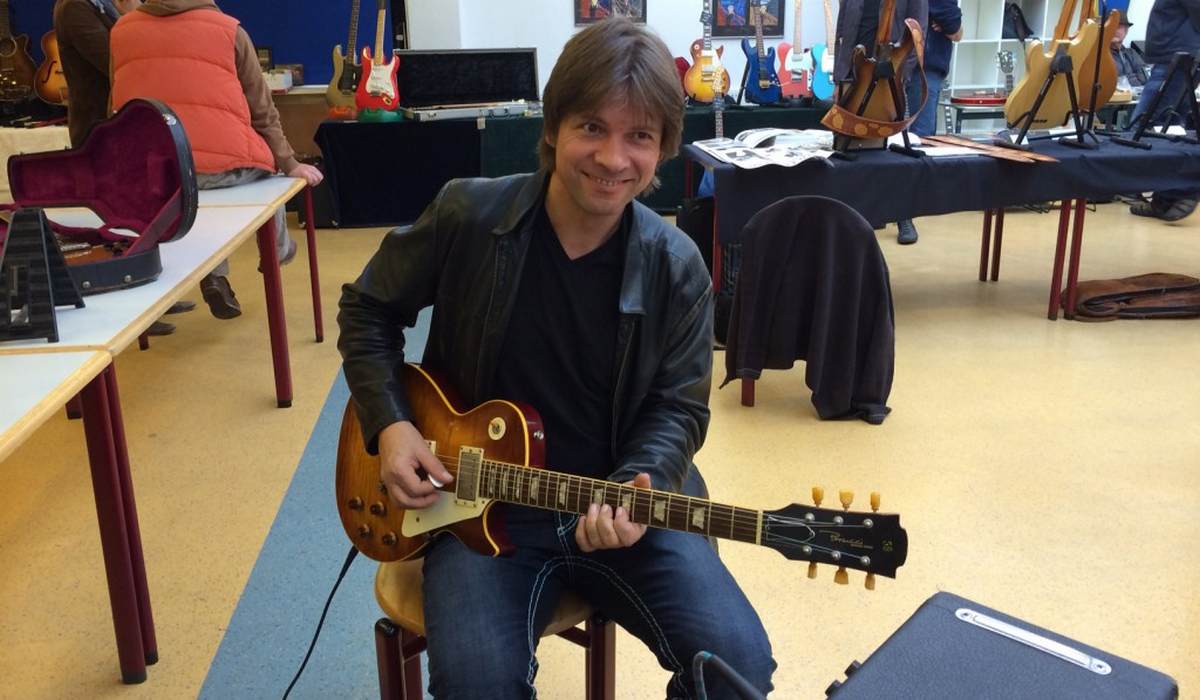